If you’re a Mac user and looking to leverage the power of your new Apple Silicon M2 chip for machine learning with PyTorch, you’re in luck. In this blog post, we’ll cover how to set up PyTorch and optimizing your training performance with GPU acceleration on your M2 chip.

We’ll also include some benchmark results to give you an idea of the potential speedup you can expect. So if you’re ready to get started with PyTorch on your M2 chip, read on!

Note that the MPS acceleration is not available until macOS 12.3+

If you have the anaconda or miniconda installed. You can install it by using command conda install pytorch torchvision -c pytorch-nightly

Here is the GPU utilisation after using this version of pytorch to train the MNIST handwriting dataset. 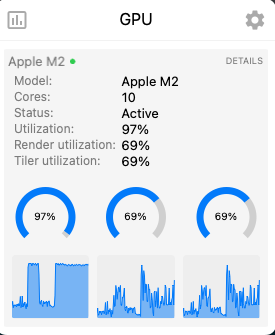 Show Me the Code

This demo uses PyTorch to build a handwriting recognition model. It also uses the MNIST dataset, which consists of images of handwritten digits, and trains a convolutional neural network (CNN) to classify the images.

It’s 1.5 times faster than the CPU version of code.

The output of the MPS version, which utilises the GPU, is as below.

The output of the CPU version is as below.

Both the CPU and GPU in this benchmark were on the same M2 chip.

Although it’s not too much of an improvement if compared to the newest NVIDIA GPUs, it is still a great leap for Mac users in the Machine Learning field.